From PE to EVP: How to Build and Execute a Succession Plan | Ep. 114 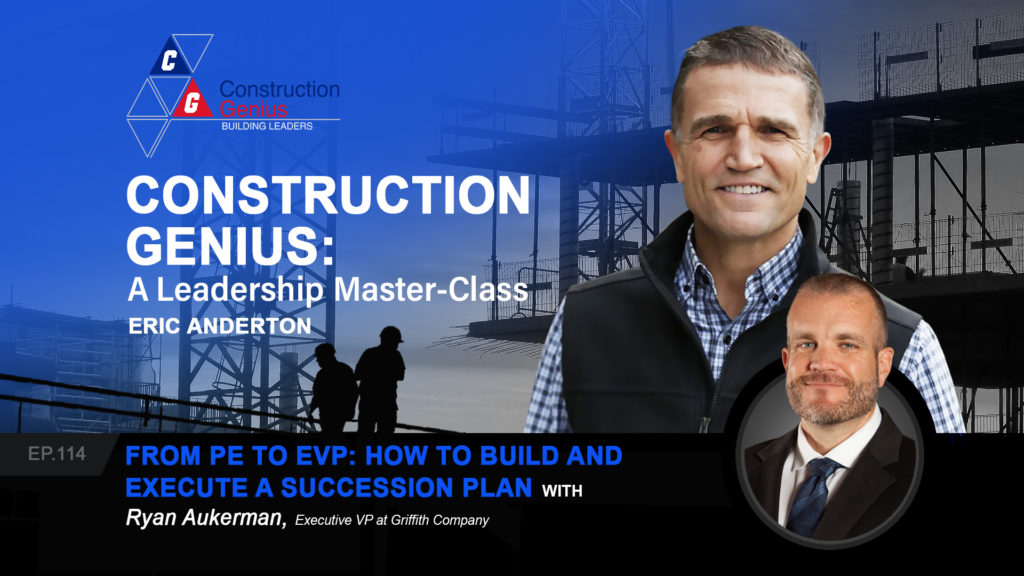 When should you start building and executing a succession plan? A company that values sustaining high-level leadership knows never to put this on the back burner. It will take years, not just months, of choosing who your qualified candidates are to mentoring them until you are confident enough that they are ready to take on those leadership roles with the passion for propelling the business forward.

In this week’s Construction Genius podcast episode, I talk with Ryan Aukerman of the Griffith company. Ryan shares his career journey and what the emerging leader’s program is all about. He discusses the methods they use to choose qualified candidates for leadership roles and the importance of mentorships internally and externally. Ryan also talks about accepting critical feedback, especially when it is something you are not comfortable with, and a lot more.

Tune in to this episode!

2:09 How Ryan got into construction

5:00 The advantage of diverse backgrounds

7:44 Early mistakes Ryan made and how he changed his approach

9:52 Difference between a good mentee and a bad mentee

13:57 Essential qualities of a construction leader

14:47 Patience and its importance

15:44 How to distinguish between laziness and slow-paced workers

16:37 Identifying the next generation of leaders

19:59 Lack of understanding of leadership roles

21:35 Who to choose when you have more than one qualified candidate for a position

22:41 Dealing with situations where someone leaves a role

24:32 Advantages of ESOP in succession planning

27:23 Filtering through the emerging leader’s program

33:16 What Ryan would do differently if he could go back

34:22 Ryan shares what he wants his legacy to be

Ryan Aukerman joined the Griffith Company Team in 2004 as a project engineer. He quickly moved his way up the ranks into Estimator/ Project Manager’s role while completing his Technology and Operations Management degree at California State Polytechnic University, Pomona.

In 2010, Ryan was appointed to be the Regional Manager and became responsible for oversight of the Southern Region. While in this role, he provided leadership over notable projects including the $81 Million Tom Bradley International Terminal at Los Angeles International Airport, $81 Million Omnitrans SBX E Street Corridor, $30 Million Port of Long Beach Pier G Terminal Redevelopment, and $105 Million Port of Los Angeles Berth 142 – 143 Terminal Automation Improvement project.

In 2015, Ryan was promoted to his current position as Executive Vice President. He has oversight of operations throughout the company, including estimating, project management, and field operations.

During his career, Ryan has worked with many public and private owners and has participated in alternative project delivery methods such as Design-Build and CMAR. He takes great pride in representing Griffith Company and works to show owners and industry partners the Griffith Way. He has been serving as a State Director for the AGC of California and a Los Angeles District Board since 2010. With an understanding that there needs to be a solid investment in the future workforce within the industry, Ryan works to support the education foundation and interacts with multiple AGC Student Chapters and his participation in Griffith’s own Internship program.

Connect with me on LinkedIn. For more podcast episodes, you may also visit my website. Tune in and subscribe to the Construction Genius: A Leadership Master-Class Podcast on Apple Podcasts, Spotify, and Stitcher.

Thank you for tuning in!