Demotion: Why it Happens, How it Affects People, and How to Recover 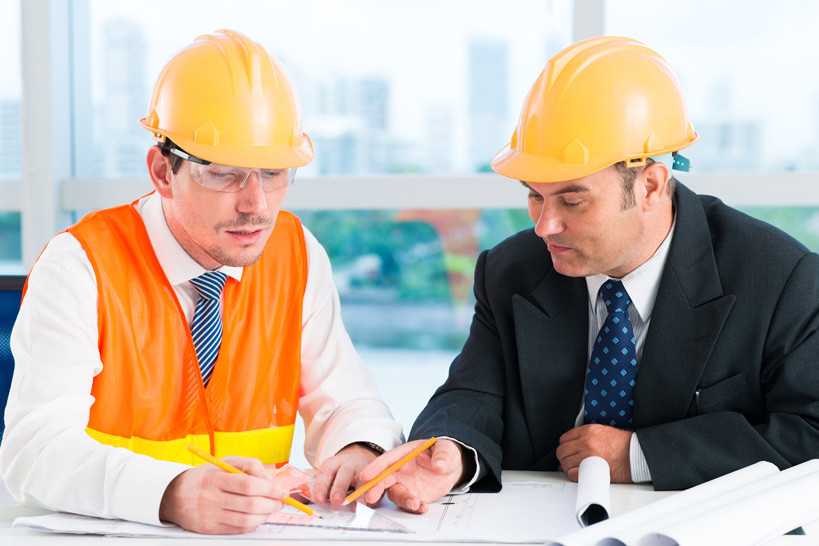 (I adapted this article from a recent podcast. Click this link to check it out)

Terrifying artillery bombardments, suffocating poisonous gas, mindless mass attacks, and muddy, waterlogged, rat-infested trenches where millions of men suffered, bled, and died. Winston Churchill, one of the greatest leaders the world has ever known, had personal experience with trenches. He also knew demotion.

Churchill was the first Lord of the Admiralty, a powerful position—the political head of the British Royal Navy, and the Government’s senior adviser on all naval affairs. A brilliant, ambitious, and pugnacious fighter, who emphasized modernization, and championed the use of combat planes.

During World War I, to circumvent the deadlock in France and shift the war’s dynamic, he advocated an attack against the German ally Ottoman Empire.

The plan was to launch a naval attack, followed by an amphibious landing on the Gallipoli Peninsula, to capture the Ottoman capital of Constantinople. (Present-day Istanbul.)

The naval attack was repelled, and after eight months of fighting, the land campaign was abandoned, and the invasion force withdrawn. 480,000 Allied forces took part in the Gallipoli campaign, at a cost of more than 250,000 casualties, including 46,000 dead—a humiliating defeat for the Allies, for the plan’s sponsors, and for Churchill in particular. He was stripped of his position. 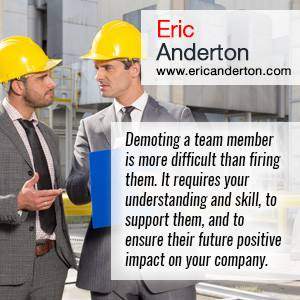 As a construction leader, you may need to demote someone due to their failures. Demoting a team member is more difficult than firing them. It requires your understanding and skill, to support them, and to ensure their future positive impact on your company.

Why people get demoted
There are three common reasons for demotion.

Sometimes, the demoted person lacked the skills needed for effective action. Mac Williamson was a longtime player for the San Francisco Giants. Players are placed in different levels of skill within a baseball organizations: A, AA, AAA, and the Major Leagues—the goal destination of every player

Mac Williamson is a “AAAA” player. In AAA he absolutely killed it, hitting home runs and hitting for power. But when he was promoted up into the Major Leagues, he was haunted by his AAA success, and never consistently performed at a high level in the Major Leagues. He lacked the skill—too good for AAA but not good enough for the Major Leagues, so he was demoted back to AAA, and eventually left the Giants.

You have a great project manager you’d like to promote into a project executive role, which would require them to shift from building a project to building up people, since they’ll have project managers reporting to them. But some people lack the skill for that shift, and are happier running their own projects than flexing any people-building skills. In this new role, at least, they are incompetent. So a lack of skill can lead to a need to demote someone.

Another reason for incompetence is temperament.

On the classic mafia TV show The Sopranos, Silvio is Tony Soprano’s consigliere, his second-in-command. At one point, Tony gets shot by his uncle and ends up in a hospital coma. So Silvio needs to take on the new role of acting boss, and various mafia members keep seeking his decisions and asking him to arbitrate conflicts.

At first he thinks, “It’s my time, and God forbid, if Tony does die, maybe I’ll become the actual boss.” But Silvio did not have the right temperament for the new role, and the resulting stress lands him in the hospital, as well, suffering a panic attack. Fortunately for the mafia, Tony Soprano recovers and steps back into his role. Silvio is more than happy to resume second-in-command. Sometimes, it’s all about temperament, and those without it need to be demoted.

Successful leadership depends upon the quality of your decisions. We all make mistakes for various reasons— arrogance, imprudence, impulsivity, lack of information, bad judgment. I know a banking executive with a brilliant career, who once made a decision to loan a considerable amount of money to an individual who could not repay it. The executive’s decision led straight to demotion.

You might have someone with the necessary skill and temperament for the new role. They may be good at making decisions, but you put them on the wrong team. Then come clashes and a lack of effectiveness.

Do you have anyone in your organization that needs to be demoted, or are you thinking about promoting someone, and setting them up for demotion, because they lack judgment or they’re incompetent? Or perhaps they are incompatible with the role that you have set out for them. 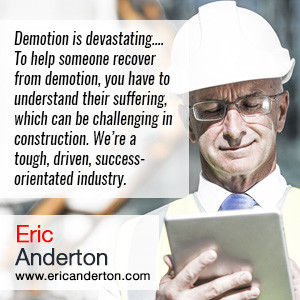 The emotional cost of demotion.
Demotion is devastating. In the midst of his demotion, Churchill said, “I feel like a wounded man. I know I am hurt but as yet I cannot tell how badly… now, I only feel shock.”

To help someone recover from demotion, you have to understand their suffering. There are three common emotional costs of demotion:

The painful, self-conscious emotion that arises when comparing your actions against your standards. We all have self-standards for our behavior and performance, and when we fall short, shame swoops in. It’s expressed as, “I’m a failure, and I’m viewed as a failure.” Many years ago, I suffered a demotion, and couldn’t help but be self-conscious about how other people viewed me.

My demotion was appropriate, but because it was sparked by a conversation I had with another individual, for years I blamed that person. Resentment can be accompanied by obsessive thoughts, a sense of victimhood, and an inability to move on.

The source of much of our lives’ dysfunction. Maybe you need to demote a young project manager that isn’t performing. Maybe they’re in their 30s, newly married, with a baby on the way. They may now take a hit financially, and instability enters their lives, and fear comes rushing in.

Or they’re later in their career, with 10 or 15 years left, and they think, “I’ll never be able to get back to that position. How will this affect my retirement?”

Or they worry the demotion is just a temporary stop on the way to termination. They wonder if you’re just having mercy, or lack the guts to fire them. And they’re afraid about what other people think—their co-workers, their wives or husbands, their families, their friends.

We all run a narrative in our minds about our career trajectory. We think it should always be ascending, with constant steam, racking up continuous promotions to more senior positions and more money.

Many of history’s leaders have been demoted or dismissed on the failure of their signature policies. But Churchill’s humiliation and his desperation to be vindicated hit him hard. His wife said, “When he left the Admiralty he thought he was finished…I thought he would die of grief.”

Those fears can hinder the demoted person’s ability to perform. This isn’t the time to abandon them to their fears. Let’s look at the third issue:

How to help the demoted person recover and make contributions to your company.

If you’ve chosen to demote rather than fire someone, it should be because you want or need them to stay within the organization. Don’t just hand them the bad news and hope for the best. Reassure them. Be clear about their new role, and its responsibilities, even if they’ve been in that position before. Paint a clear picture of what success looks like for that role. Show them how that role fits within the bigger picture of the organization. But don’t make false promises. You can’t guarantee future promotions.

First—encourage them to begin a new story. Don’t let them define themselves by the demotion, walking around the office thinking, “I’m the guy who used to be in a position.” Encourage them write a new chapter of their history, by focusing on positive, forward actions. Ask them to picture the day of their retirement. How do they want to be remembered? This legacy vision can help them accept their demotion as a temporary setback on their way to new goals and actions.

Second—encourage them to embrace the pain on their road to improved performance. Sometimes pain can’t be hurried. You need to sit with it before it loosens its grip.

Third—encourage them to be grateful. This is a tough one, sure. It’s easier to wallow in resentment, bitterness, and self-pity. When I went through my demotion, gratitude for the situation helped propel me out of the swamp. I overcame my bitterness and shame. I was thankful, because I understood that the demotion was due to my behavior, so my behavior needed to change. So coach them on gratitude—it can lead to better things.

Fourth—ask them, “What is your unique contribution? Your strengths? What can you do that others can’t? How do you want to contribute to your legacy?“

Finally, give them some tough love. Confront them, but with kindness. If you see them wallowing in self-pity, self-recrimination, or self-justification, tell them, “Take your eyes off yourself and think about the contributions you can make to the organization.” This can help pull them out of the swamp and back on stable and effective ground.

At this point, you might be tempted to just move on. Don’t make that mistake. Don’t meet with them once or twice and hope for the best. Commit to regular meetings to evaluate, critique, and recognize them. If they’re directly reporting to you, meet with them weekly. if they’re indirect reports, then weekly-to-monthly.

Evaluate and critique them based on objective numbers and subjective feedback that is linked to their role and responsibility. Particularly if a specific skill or behavior led to their demotion. If they faltered at holding others accountable, work with them on that specific skill. If you see improvement, recognize them. Everyone needs recognition, particularly following a demotion. They want to know that they’re on the right track.

I can hear your objections: “Hey, suck it up. You got demoted. Stop complaining and move on.” To an extent, you’re correct. But remember the investment that you’ve made in that person, the commitment they’ve made to the company, even if they weren’t successful in that last role. Understand the deep impact of a demotion. Your job as a leader in construction is to help others through those periods of demotion so that they can achieve success on the other side.

Remember Churchill—despite his demotion, the future prime minister did not slide into mediocrity.  He resigned from the government and joined the 2nd Battalion Grenadier Guards on the Western Front. He went from cabinet office to the frontlines to the trenches.

Later he was promoted to lieutenant colonel and placed in command of the 6th Battalion Royal Scots Fusiliers. He led from the front. He showed physical bravery and genuine concern for his men, regularly visiting their trenches on the edge of no-man’s land. Eventually, he returned to England as a member of parliament and was later named Secretary of War. He refused to be defined by his failures or demotions. 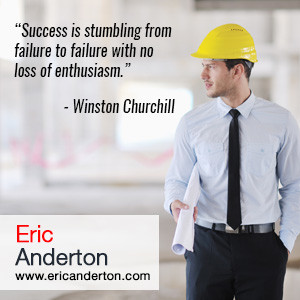 “Success,” he once said, “is stumbling from failure to failure with no loss of enthusiasm.”
Next Steps:
If you need to help someone recover from being demoted, download the Construction Leaders Dashboard.

The Construction Leaders Dashboard is one of the simplest and yet most powerful tools for leaders in construction companies of all sizes that can be used to coach someone through the challenges associated with being demoted by providing a framework to clarify their: Vision, Mission, Values, Edge, Initiatives, Metrics, Key Relationships, and Development Opportunities.